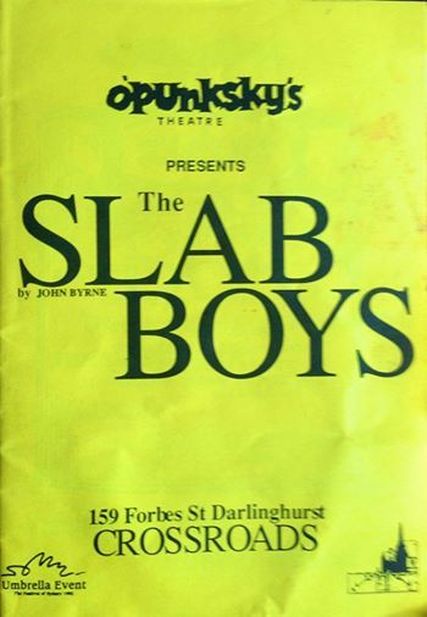 The Slab Boys became O'Punksy's third hit Independent theatre production at the Crossroads Theatre in Forbes Street Darlinghurst.
Due to its popularity and burgeoning industry support this production help to galvanise the next wave of Independent theatre producers in Sydney into movement that saw the rise of Burning House, Tamarama Rock Surfers and Pork Chop whose legacy still resonates today at venues like the Old Fitz, 505 and the KIngs Cross Theatre.
Trivia:
This production of The Slab Boys was an opportunity for many recent WAAPA graduates including the shows director Andrew Lewis and actors: Robert Willox, Andrew S Gilbert, Gerald Lepkowski and John O'Hare.
From its inception O'Punksky's The Slab Boys was predominately a gathering of ex-pat West Aussies living in Darlinghurst,Sydney ( also known as the West Coast Mafia) that formed a troupe and made this incredibly popular show such a success for O'Punksky's.
Cast:
Denise Roberts
Lysa Kelly
Kim Lewis
John O'Hare
Gerald Lepkowski
Andrew S Gilbert
Costumes: by Alison Leonard.
Program cover for Slab Boys designed by Jonathan Sweet & Paddy Dickson.

THE SLAB BOYS BY JOHN BYRNE. 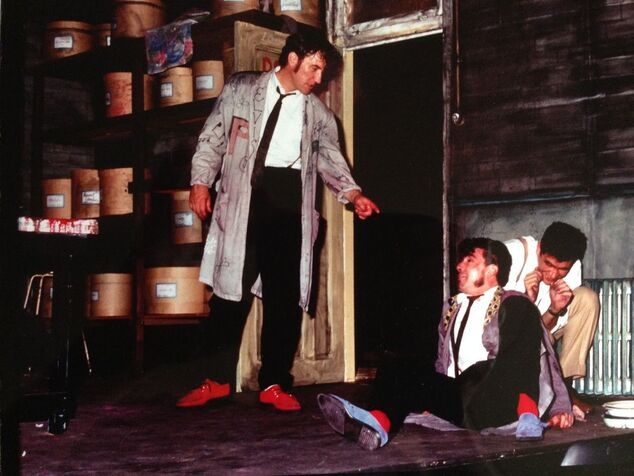 THEY work in the 'slab room' grinding up pigments used to dye the fabric designs.
There's Spanky Farrell the ratbag fitting in a little work amongst "skiving about", Phil McCann the smooth talking "Teddy Boy"with dreams of getting up and out, and Hector McKenzie (Kim Lewis) the wimpy youngster, butt of all their jokes and slapstick. Into this set up is plunged upper class Alan Downie (Gerald Lepkowski) whose father has set him here for work experience....more to come.
​

The infamous Crossroads Theatre on Forbes Street Darlinghurst.
Trivia: The adjacent St Peter's lane was a renowned beat for hookers and transexuals during the 1980's through the 1990's.
The theatre is now part of the Sydney Church of England Girls School.